I seem to be on a bit of a middle grade fiction kick, and here’s another in that genre.

Callum Hunt (Call) has been warned away from magic from his father.  A former Magician, Call’s father turned away from Magic after the death of Call’s mother.  Then Call is called in for the Iron Trial – and fails at failing.  He is admitted into the Magisterium in order to learn magic and control.  It’s a sometimes sinister, sometimes surprising place, and there he will forge friendships and discover truths about his past which may impact his future. END_OF_DOCUMENT_TOKEN_TO_BE_REPLACED 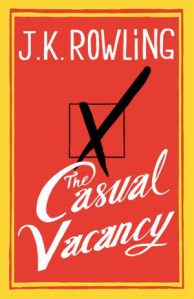 Phew.  I just finished The Casual Vacancy by J.K. Rowling.

I’m feeling very… emotionally drained.  I need to preface this post by explaining that I do NOT like drama – I don’t watch TV shows (generally) and I don’t like a lot of real-life books.  I picked this one up, originally thinking (very mistakenly) that it would be a murder mystery (it is not at ALL).  Instead, it’s a story that deftly weaves the lives of numerous small-town characters together.  It deals with life – the gritty, sad parts of life. Abuse (substance, physical, emotional, sexual), bullying, addiction, relationships, and politics all feature throughout.  There is a diverse cast, all of whom you do get to know and can sort of sympathize with or at least understand their motivations.  Spanning generations (from teens to grandparents), the book is sort of about filling a vacancy in the Parish Council resulting from the sudden demise of Barry Fairbrother.  It’s more a story of people – their relationships and their struggles.

All told, it was not for me.  I cried (a lot) and feel drained and sad at the end of it.  I don’t handle real-life drama / sadness well, so that definitely taints my view.   So much so, that I’m not going to attempt to rate this book.  I will say that I think others would enjoy it (I bet my husband would like it actually) but if you’re a lover of YA Fiction it is not for you.

*Update: I will rate it, as I feel I do need some sort of record of my feels.  Bear in mind my comments above: 2/5

I read “Blood Red Road” by Moira Young a while ago, while on a dystopian fiction kick.  I really enjoyed it.  Getting used to the writing style (e.g. the lack of punctuation) took a while, but I admire the way it suits the book and the characters.  Saba (and even Emmi) do such justice to my love of strong female characters!

Blood Red Road follows Saba, a testy young girl trying to track down and recover her kidnapped twin brother, Lugh.  Their younger sister, Emmi, tags along the whole way and proves that she’s got just as much stubbornness as her elder siblings. Saba finds herself trapped in a grim situation and fights with a fierceness I admire while still holding onto her self, her purpose, and her humanity. There’s an almost simplistic black-and-white sense of good and evil in this book that is somewhat refreshing.  Saba’s internal fight for what is right is mirrored clearly in her external fight against Lugh’s kidnappers / her oppressors.

I came away from Blood Red Road feeling optimistic and excited about the next instalment in the seires: Rebel Heart. 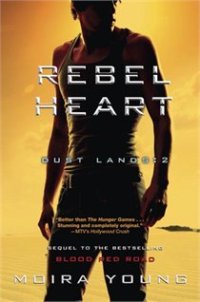 I just finished Rebel Heart and was sadly disappointed.  The story picks up where Blood Red Road left off – following Jack on his errand as the bearer of bad news.  It was nice starting things out from his perspective but it was a jolt going back to Saba (as she and her small party head West) and I felt like it made the story a little disjointed.  I kept expecting the perspective to switch back to Jack and it did not.

Gone were the black-and-white good-and-bad divisions. These were stripped away almost too abruptly, and I didn’t know where my sympathies lay.  With Jack? With Saba? With Lugh?  Or (strangely and in a kind of misguided way) with DeMalo?  Emmi remained true to form but the remainder of the cast shifted too much for me to feel comfortable with them.  Saba especially.  I felt that yes, she of course had the right to go a bit bonkers, but after the arrival at the tavern things seemed go downhill for me. The bit with DeMalo – I just don’t know. I couldn’t quite understand her and couldn’t agree with her.  She went from being such a strong girl that I could really get behind to this … ambiguous figure.   So I left feeling unsettled and uneasy.  Particularly after reading the last bit in the book.  (Oh, Tommo!)

I’ll definitely read the next book, when it comes out, and hope for some redemption from the second.