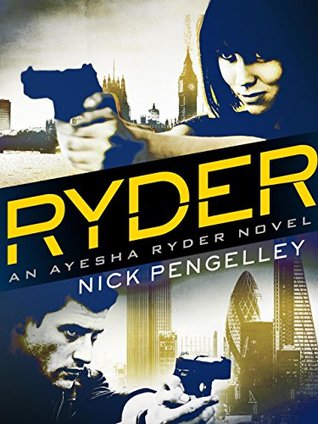 Ayesha Ryder bears the scars of strife in the Middle East. Now her past is catching up with her as she races to unravel a mystery that spans centuries–and threatens to change the course of history.

As Israeli and Palestinian leaders prepare to make a joint announcement at the Tower of London, an influential scholar is tortured and murdered at his home in St. John’s Wood. Academic researcher Ayesha Ryder believes it is no coincidence. Sir Evelyn Montagu had unearthed shocking revelations about T. E. Lawrence, the famed Lawrence of Arabia. Could he have been targeted because of his discoveries?

Ryder’s search for answers takes her back to her old life in the Middle East and into a lion’s den of killers and traitors. As she draws the attention of agents on both sides of the conflict–including detectives from Scotland Yard and operatives from MI5–Ryder finds herself stumbling across Lawrence’s secrets, an astounding case of royal blackmail, and even the search for the Bible’s Ark of the Covenant.

Every step of the way, the endgame grows more terrifying. When an attack rocks London, the real players show their hand–and Ayesha Ryder is left holding the final piece of the puzzle. Goodreads description

END_OF_DOCUMENT_TOKEN_TO_BE_REPLACED

Gone Girl by Gillian Flynn is waaaaaay off the path of my usual reading material.  A thriller – what??

But it was so good! And gripping!  And twisty!  And unexpected!

I feel like I can in no way describe what this book is about, so I will quote the cover:

On a warm summer morning in North Carthage, Missouri, it is Nick and Amy Dunne’s fifth wedding anniversary. Presents are being wrapped and reservations are being made when Nick’s clever and beautiful wife disappears. Husband-of-the-Year Nick isn’t doing himself any favors with cringe-worthy daydreams about the slope and shape of his wife’s head, but passages from Amy’s diary reveal the alpha-girl perfectionist could have put anyone dangerously on edge. Under mounting pressure from the police and the media—as well as Amy’s fiercely doting parents—the town golden boy parades an endless series of lies, deceits, and inappropriate behavior. Nick is oddly evasive, and he’s definitely bitter—but is he really a killer?

This book takes you through a chilling and frighteningly realistic portrayal of psychopathy and a love story gone wrong.  The story is stunningly well written, and the characters deep and developed.  It leaves you on the edge of your seat – asking both What happened? and How did we go from here to there?  I got so into it and anxious about the story that I had to put down the book a few times. And – I admit it – I peeked ahead at the ending.  It was the only way I could finish the book, knowing what direction it was going to take.  I’m weird like that. (Yes I enjoy knowing the ending – it decreases my anxiety about what is coming).

If you’re in the mood for a suspense / mystery / thriller then I would highly recommend this one!